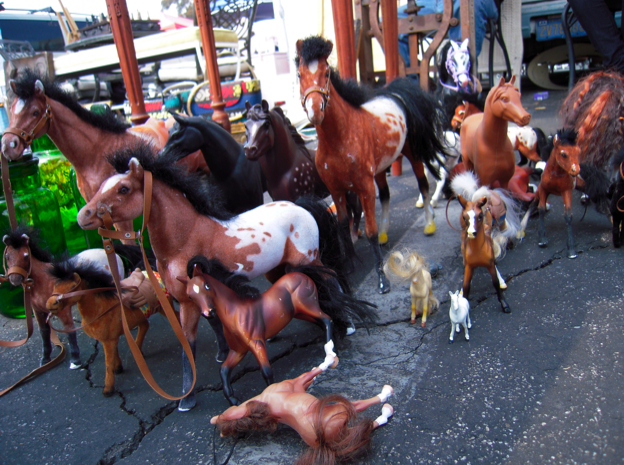 How did you play as a child? This question was posed to /r/askwomen and as I scrolled through the responses I saw everything from astronaut to animals, but there was a heavy emphasis/ rampant disclaimer of “NEVER ONCE Barbies, and NEVER ONCE playing house,” attached to nearly every response.

It further seemed that a majority of responses focused specifically on socially imposed male-centric forms of play, “I loved hot-wheels and pretending to be a cowboy.” It made me feel like, yeah we get it you are NOT defined by pink toys and you really would have rather played with trucks more than anything else in the world! It made me feel like we are living in a society where many women feel that in order to be accepted as equals we need to shame anything about womankind that is “typically girly.” Or is it that we make pink toys less fun than blue toys? Must we validate our worth by insisting that as children, before society hijacked our young brains, we definitely wanted to do the exact same thing as boys and never ever wanted to do anything “girly” at all?

Lets call a spade a spade and just say all kids are weird. I would argue, if you didn’t touch a Barbie throughout your youth boy OR girl, it was not because you were resisting gender-normative pressure as a seven-year-old. If you played exclusively with Barbies and loved your easy-bake oven even if you only ate the powder mix, it is not because you are the victim of society’s terrible game. At most, let us all take a deep breath and admit, as children we played with whatever we had access to at the moment, and in general.

My brother and I both dressed up in tutu’s, jumping back and forth between the couches listening to the marketplace chase song from Aladdin on repeat. I flooded the lawn to make marsh environments for my plastic horses who were always going through a divorce. I also played with Barbies in my Friend Kasey’s panic-room-turned-pink-oasis, and was totally jealous of her collection of pink shit. I played pretty much every sport with my dad as the coach and hated every moment of it. I filled the bathtub with hot water and at the last minute turned it to cold and whooshed it along the sides, pretending to be a seal in the arctic and winter was coming and we were about to die (we called this “Hawaii Springs” for whatever reason). I was a magic cheetah that could transform into any animal but was mostly a cheetah.

To be frank, I mostly didn’t like playing with toys or pretending; I preferred reading.